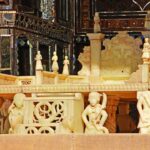 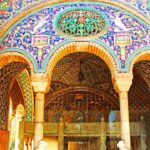 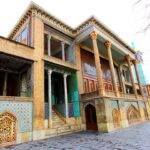 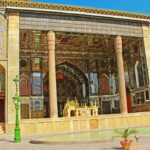 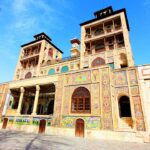 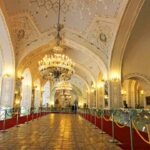 Golestan Palace, a Valuable Monument of Iran at the Heart of the Capital

Lavish Golestan Palace mesmerizes everybody, even those not interested in history. So, you can find the manifestation of Persian art in every corner. In addition, the colorful walls of the palace are ideal choice for photography.

In regards with history, this palace has a special place among the monuments of Iran. Because it has been the origin of many important events and transformations; and an inseparable part of Iran history.

This palace is located at the center of Tehran, in the historical fiber of the city. It is easy to access and many important tourist sites are around it. The most important one is Grand bazaar of Tehran that you should get by to reach the palace.

Golestan palace was registered in UNESCO World Heritage site in 2013, as the first tourist site of Tehran. Both historical and art value are two important characteristics that played an important role in the global reputation of this complex. Despite architectural changes having taken place in the contemporary era, the palace is still the most-visited monument of Tehran. Annually, this site welcomes many tourists from all over the world.

The History of Golestan Palace, from Safavid to Qajar Dynasty

The first royal building of this palace was constructed in the 15th century in the Safavid era. At the time, Pietro Della Valle, the famous Italian tourist, traveled to Iran. He described Golestan Palace with surrounding plane trees in his travelogue.

The construction of this palace continued in the Zandieh era, but reached the peak of prosperity in the Qajar era. Different reasons were involved in this prosperity such as the crowning of Agha Mohammad Khan Qajar in this palace. In the reign of Naser al-Din Shah Qajar, this complex was influenced by western architectural style. It resulted from the frequent travels of the king to Europe and his fondness to European architecture.

In the late Qajar dynasty, some important historical events occurred in this royal complex. The most important one was Constitutional Revolution that is recorded in the mind of Iranians forever. Even after the overthrow of Qajar dynasty, it kept its usage as a place to hold the crowning ceremonies of Pahlavi Kings.

Golestan Palace, an Integration of Modern and Traditional Architecture

You can see all the features of Qajar-era traditional architecture in Golestan Palace. In the renovation process of this complex, the first signs of European style architecture appeared.

Mirror, Stucco and Paintings of the Interior Space

The interior space of Golestan Palace has been adorned with mirrorwork, plasterwork and paintings. For example, Thakht-e Marmar (literally means marble throne) is adorned with woodcarving and marble-carvings by artists from Isfahan. The plasterworks applied in Salam Hall is also of the most outstanding adornments of the palace, the similar of which is observed in Alhamra Palace. In addition, this hall features mosaic-covered floor and tables and chairs covered with gold sheet. The integration of Iranian art and European-based architecture of Shams ol Emareh hall is also of the attractions of this complex. 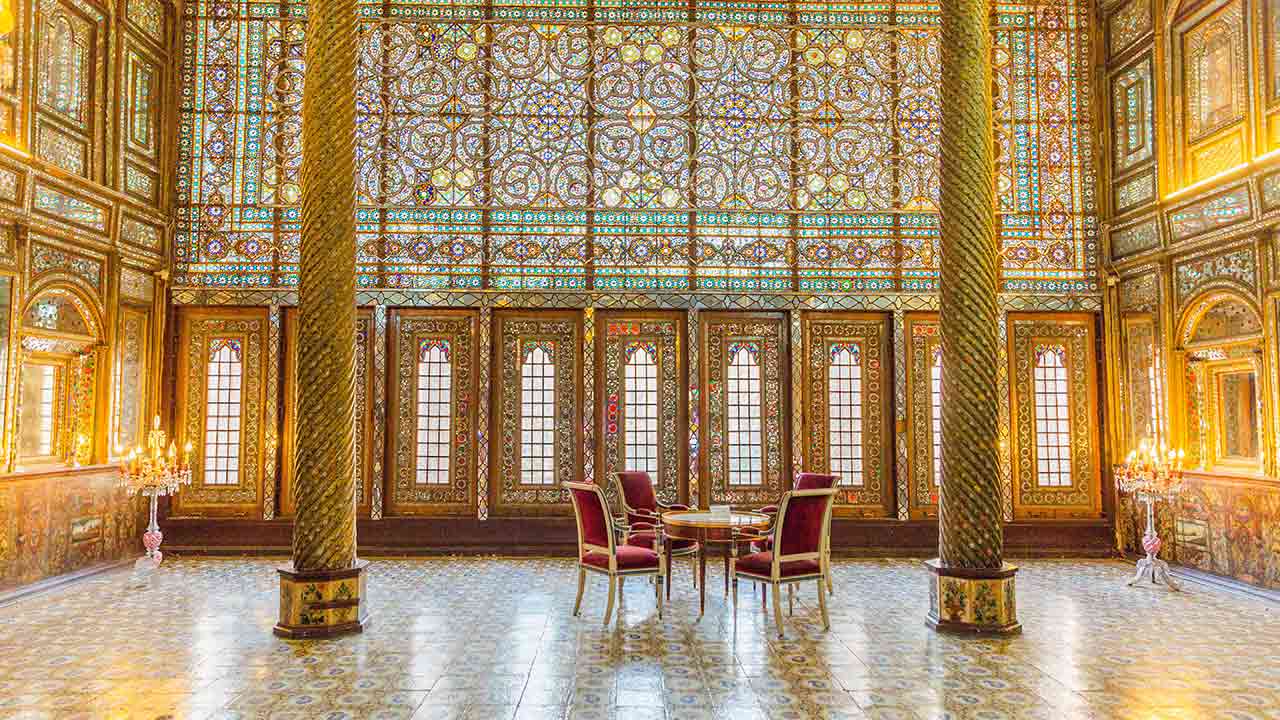 The Most Important Parts of Golestan Palace

This complex includes many halls. The most important ones are Shams ol Emareh, Mirror Hall and Windcatchers Halls. At the center of this walled structure, you can find a garden full of flowers.

Shams ol Emareh, the most important attraction of this palace, was the symbol of Tehran in the past. This tall building was constructed by the order of Naser al-Din Shah Qajar to have a view to the surrounding.

With 35 Meter height and 5 floors, Shams ol Emareh was the tallest building at the time. It also made a great development in constructions. This hall features exquisite mirror works, stucco, and paintings that mesmerizes everybody. 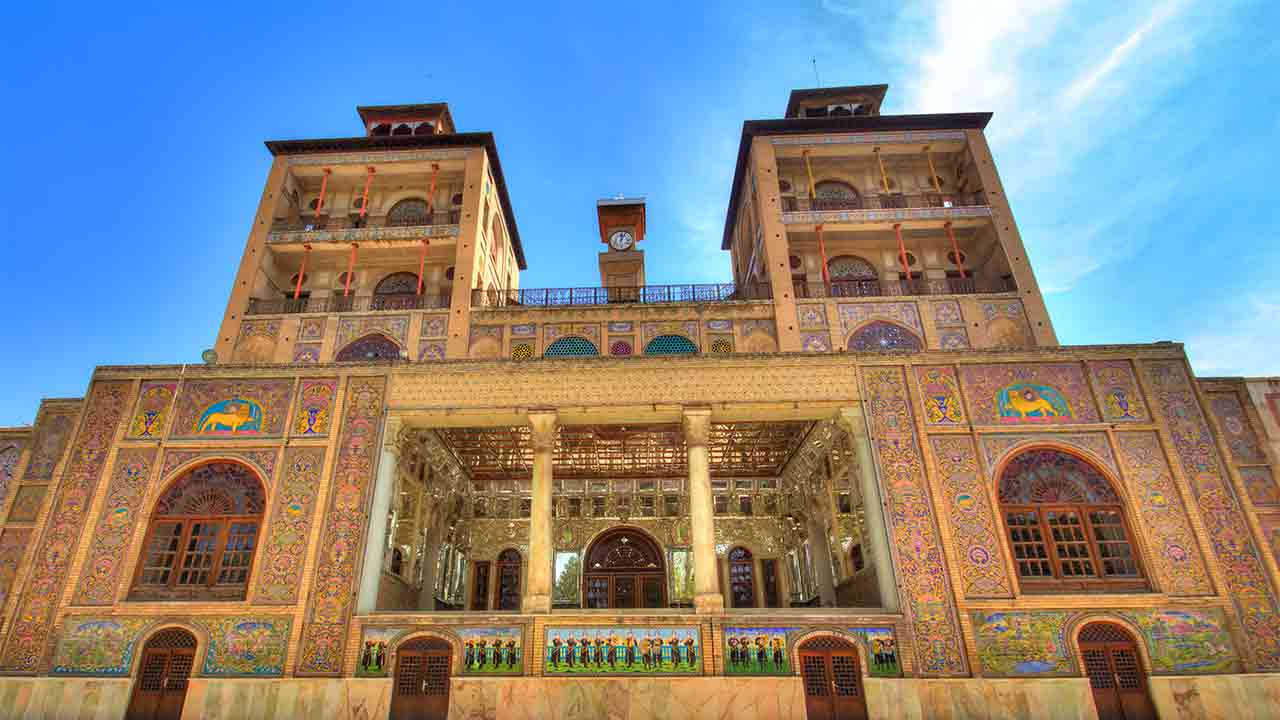 Marble Throne Hall, also known as Marble Throne Terrace, is the oldest structure of Golestan Palace. Many of the objects displayed in this hall were transferred from Vakil Palace by the order of Agha Mohammad Khan Qajar. It was also where coronations and other official court ceremonies were performed.

At the center of this hall, there is a marble throne that belongs to the reign of Fath-Ali Shah Qajar. This throne, which has high similarity with Solomon Throne, was carved by prominent artists from Isfahan. The throne has been designed as if it is being carried on the shoulder of monsters and angels. Around the throne, some Persian verses have been carved in praise of Fath-Ali Shah. 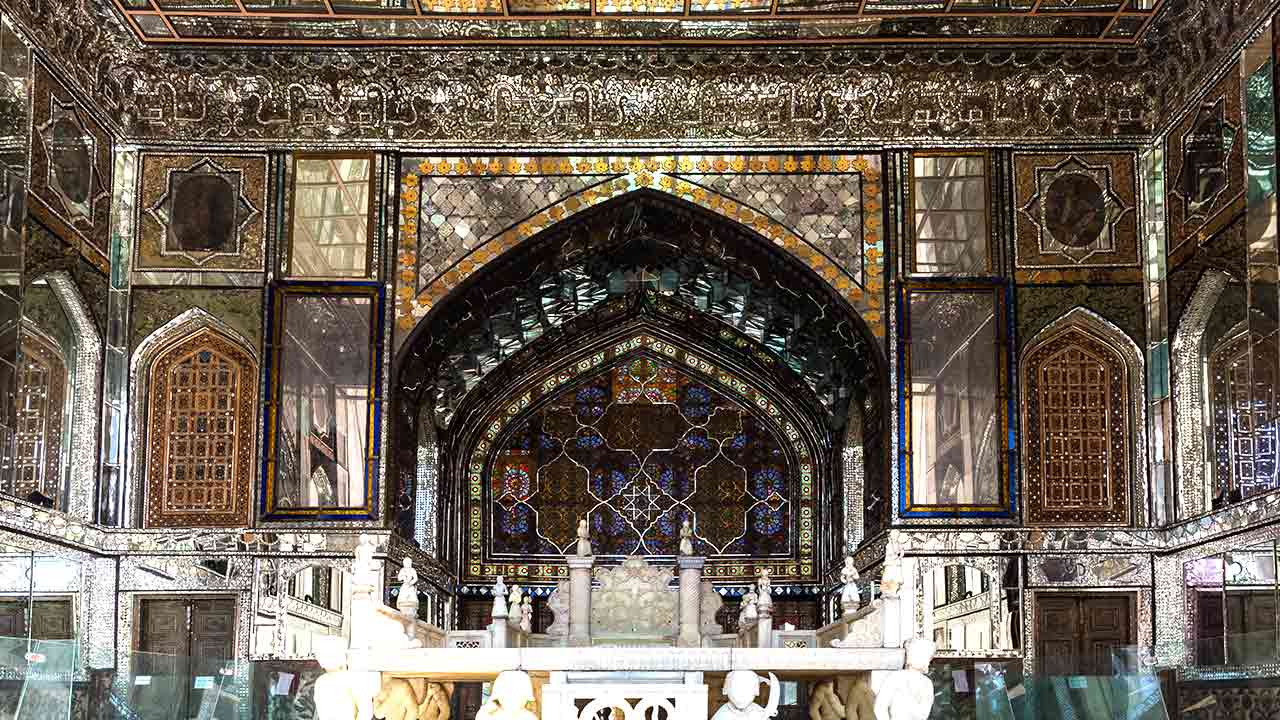 This hall was initially designed to be a museum. After the throne moved to this place, it changed its use to hold official ceremonies and was known as Salam Hall. It is noteworthy that the coronation ceremonies of both Pahlavi kings were held in this hall. 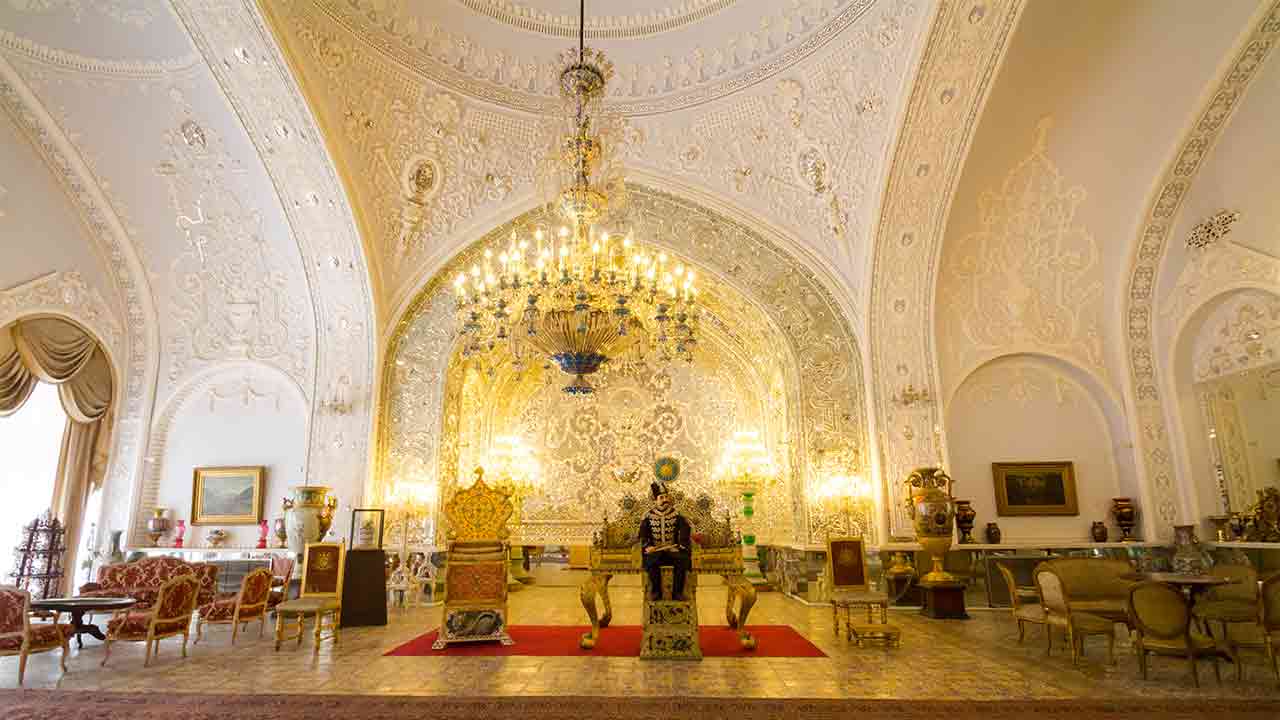 Mirror hall is located next to Salam Hall and features beautifully mirror-worked walls. What makes it distinctive is the painting drawn by Kamal-ol-molk, the famous Iranian painter. In this work, the artist marvelously depicts the glory of this hall. 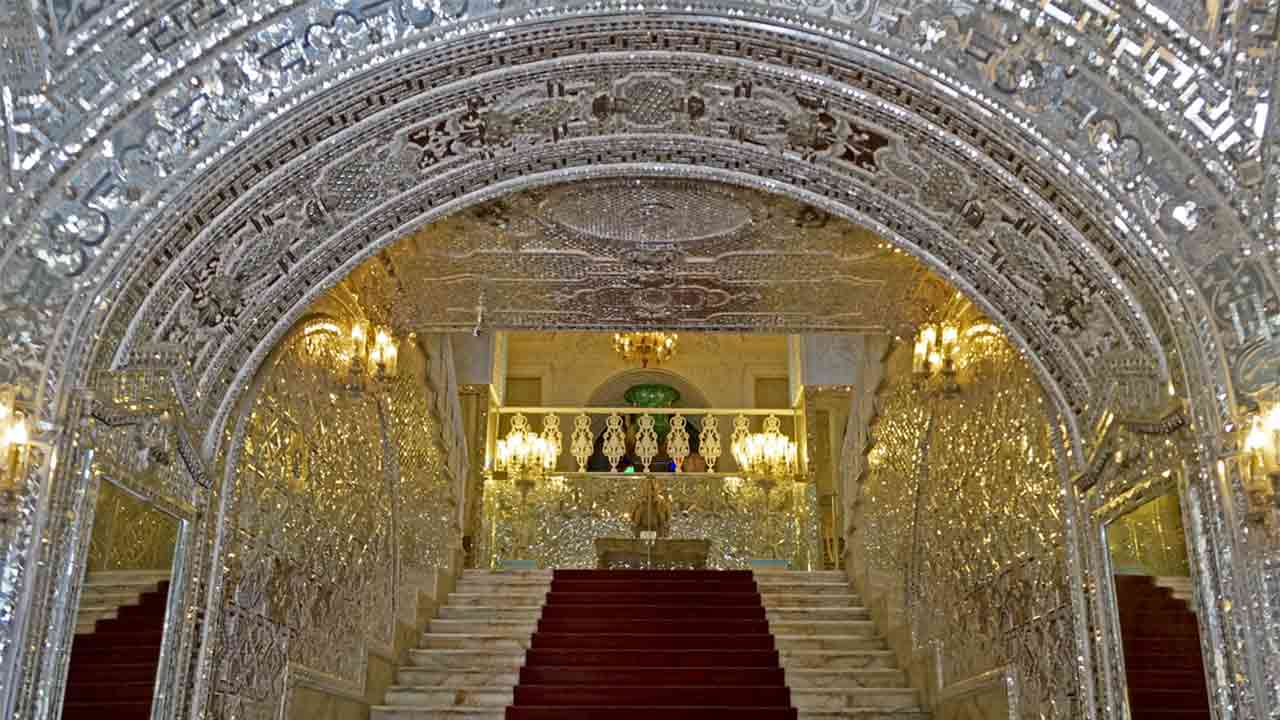 This hall is characterized with surrounding tiled windcatchers. The interior space of this hall and Pond House (Hozkhaneh) is cool. So, Qajar kings hung out in windcatcher hall on the hot days of summer. 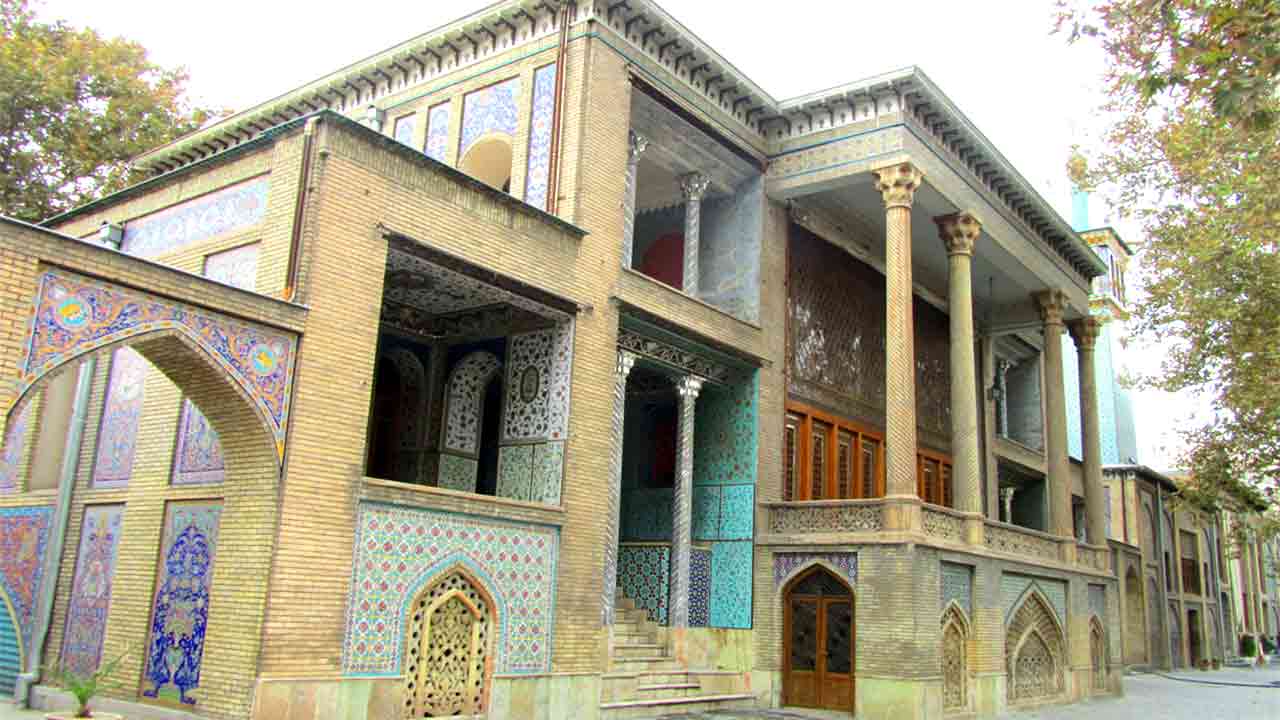 This covered terrace, located in the northwest of Golestan Palace, has a pond inside. It is of the old structures of the palace, through which Marble Throne hall was reached in the past.

This part of the palace is noticed by tourists due to a historical event. After Agha Mohammad Khan Qajar reached the throne, ordered Karim Khan Zand’s body to move from Shiraz to Tehran. Then the body of this king of Zand dynasty was buried under the staircase of this part and people used to walk over it. In fact, his purpose of doing this cruelty was to prove the power of Qajar kingdom. 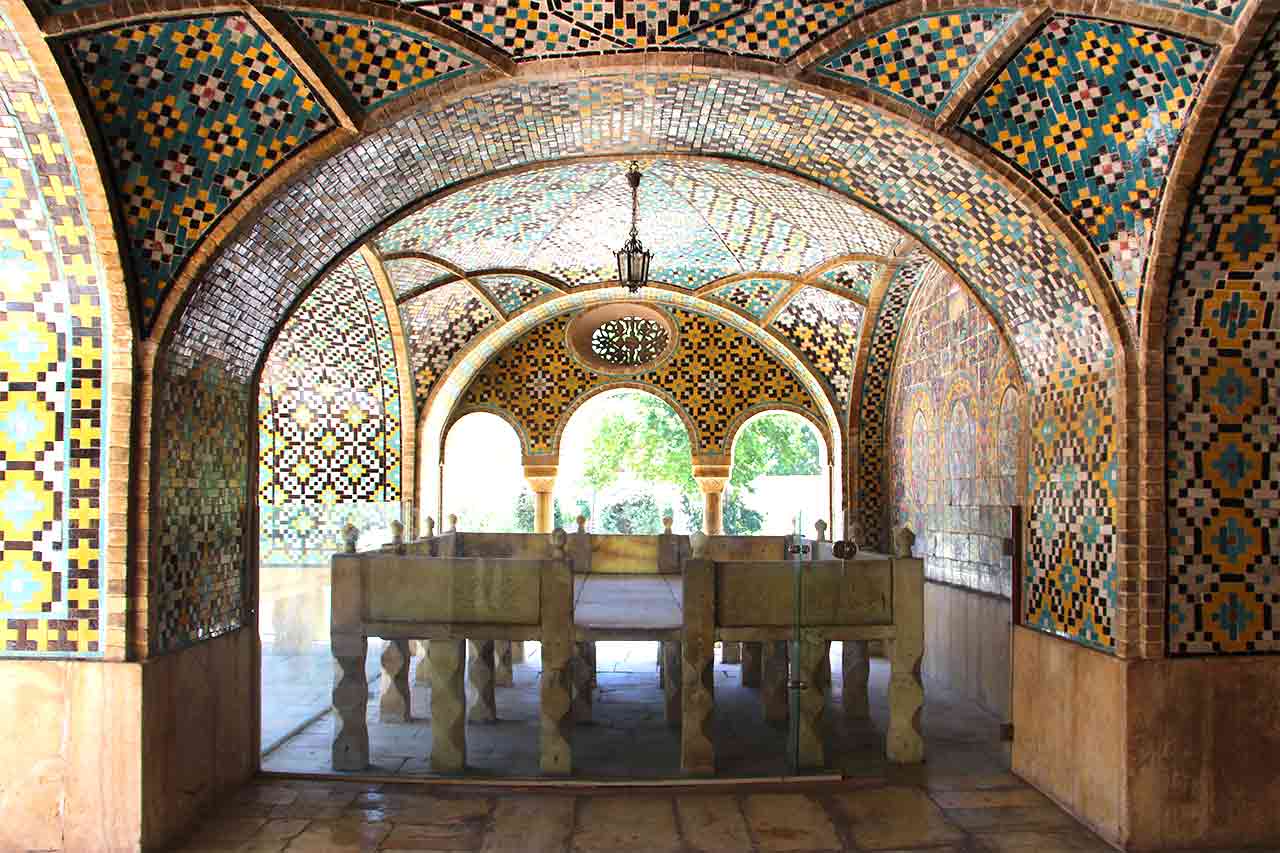 Golestan Palace in the Eyes of Tourists and Politicians

Iran was the destination of many politicians, tourists and orientalists in the Qajar era. Because the relations between Iran and European countries developed in this era and the number of foreign kings travelling to Iran soared.

Ernest Orsel, the Belgian tourist, compared this palace with Kremlin Palace in Russia. He also described its garden as a pleasing sanctum that has a special place in the dry country of Iran.

Heinrich Brugsch, the German Orientalist, travelled to Iran twice from 1859 to 1886. He described this royal palace as a small city in the heart of Tehran. According to his descriptions, guards in red are always patrolling the palace.

Don’t miss Golestan palace on your trip to Iran. This UNESCO-listed site has witnessed many important historical events of Iran. It has always interested tourists due to its decorative art and outstanding architecture.

1001 Nights Tours includes this palace almost in all itineraries. You can view the itineraries that include Tehran here. You can also get familiar with other Iranian UNESCO-listed sites here.