Historical houses of Kashan demonstrate the artistry of Iranian architects. In the Qajar era, from 17th to 19th century, it was common to construct lavish houses. So, merchants spent too much on constructing beautiful houses with astonishing architecture. Each of the houses reveals a part of the history of this city and its owners. It is noteworthy that these houses were of the private properties of their owners, and are known with their family name nowadays.

The Evident Architectural Features of Historical Houses of Kashan

In spite of some features that distinguish the historical houses of Kashan from each other, they have somethings in common. In fact, the most important features of Iranian architecture have been observed in all of them. For example, all these houses are divided to Andaruni and Biruni. You can also find windcatchers on their ceilings. In addition, sardab and lush courtyards are the inseparable parts of them.

What is the Usage of Andaruni and Biruni in the Historical Houses of Kashan?

The private parts of the house, which were used by women and children, are referred as Andaruni. Being surrounded by tall walls, this part of the house is not visible to strangers. In some of the historical houses, Andaruni is connected to Biruni with a narrow aisle.

Biruni includes public spaces which were mostly used by the men of the family and guests. Catering equipment was transferred from Andaruni to this part. 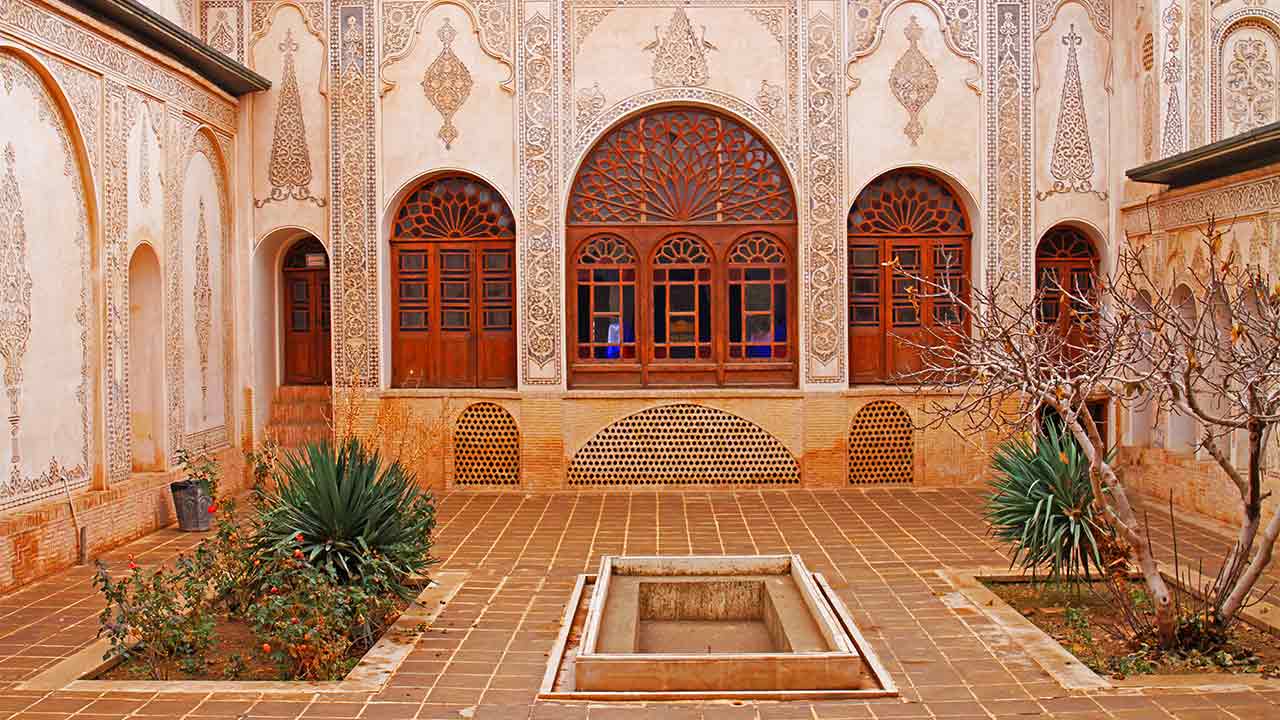 Hashti, the Lobby of Historical Houses of Kashan

Hashti is referred to a covered area that is reached after the entrance aisle, prior to the main space of home. It is used as a waiting room or a space in which the gusts are served away from the main structure of the house. So, they have some platforms all around for sitting. The modernized form of Hashti, which is constructed in large buildings, is known as lobby. 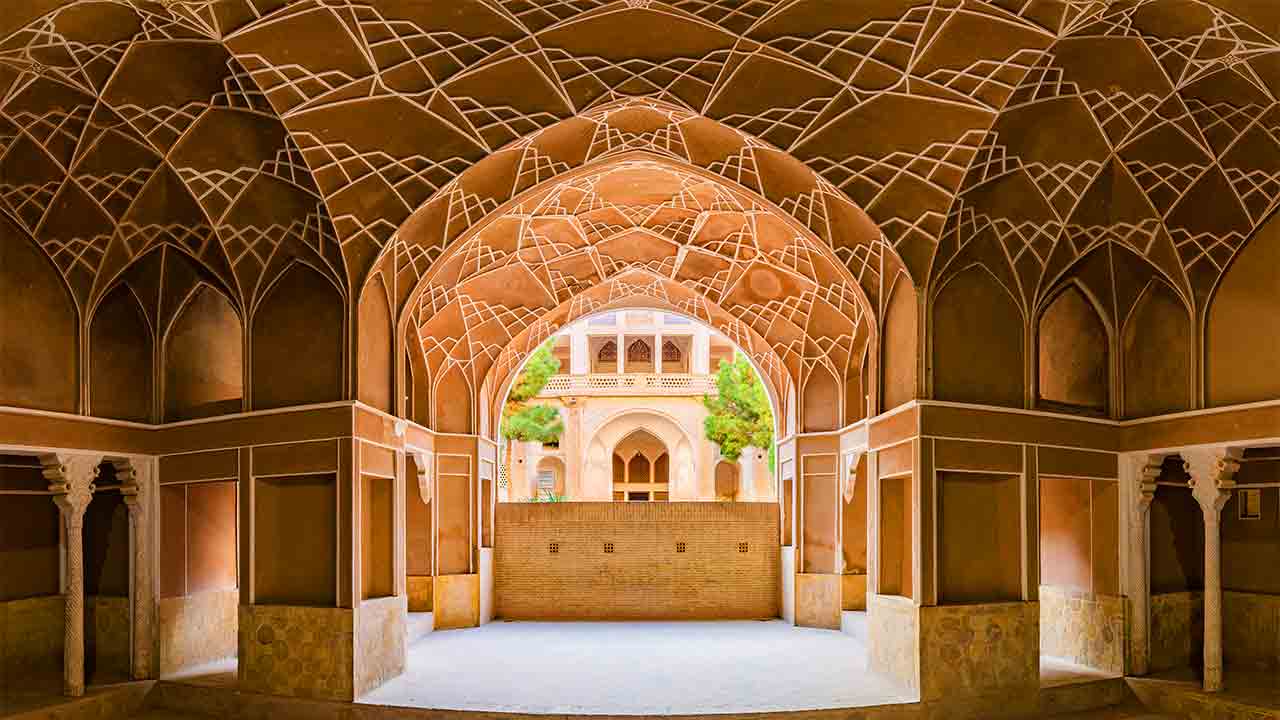 Windcatcher, the Symbol of Historical Houses of Kashan

Windcatchers are the towers devised on the highest point of the building. They result cool air to move in the house; even in the underground rooms, called sardab.

Sardab, the coolest part of Iranian old houses, functioned as a place to store foodstuff. Besides windcatchers, qanats play an important role in supplying the cold air of sardabs by moving water to the surface via channels. 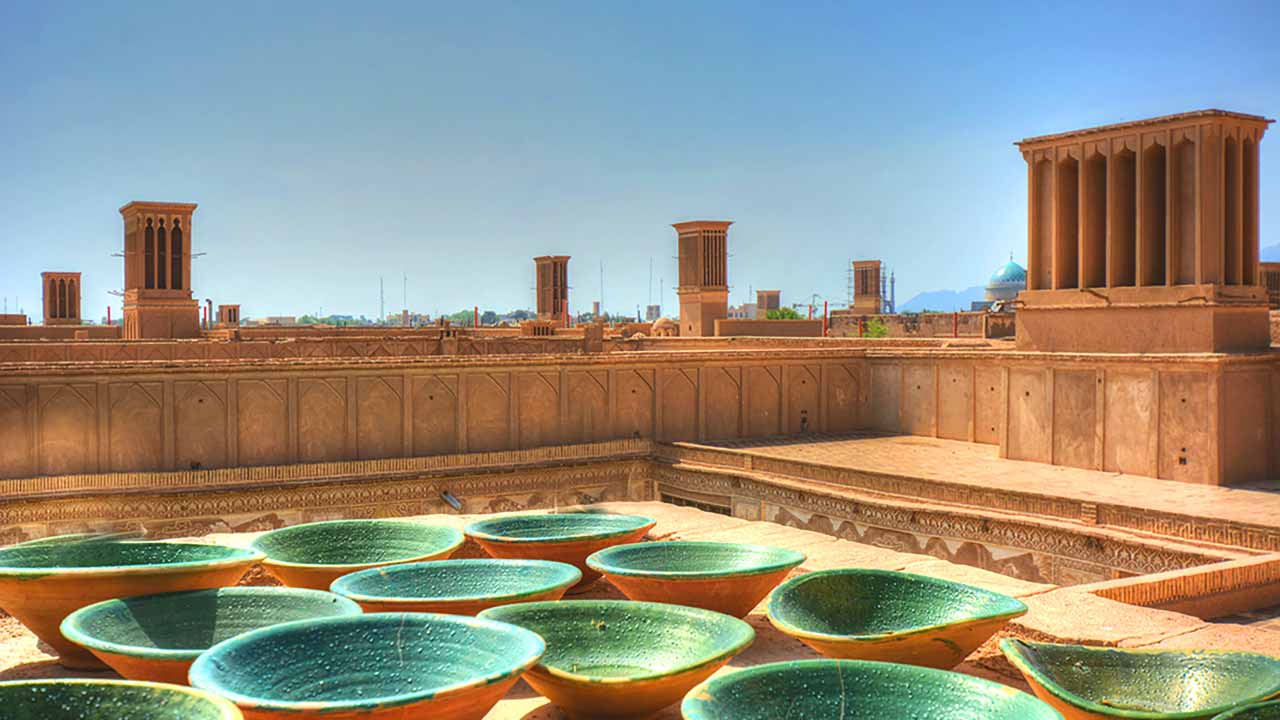 Panjdari, the Most Important Part of Historical Houses of Kashan

Undoubtedly, the most lavish part of the historical houses of Kashan is a room, known as Panjdari. This name is divided into Panj, literally means five, and dari, literally means door. This room is also known as Shahneshin.

As its name indicates, this room includes 5 doors. It is a large room used as the main hall of the room. The five doors, lying next to each other, are opened to a big porch. The doors are made from wood and decorated with stained glass.

In the following, you read about the most important examples for historical houses of Kashan: 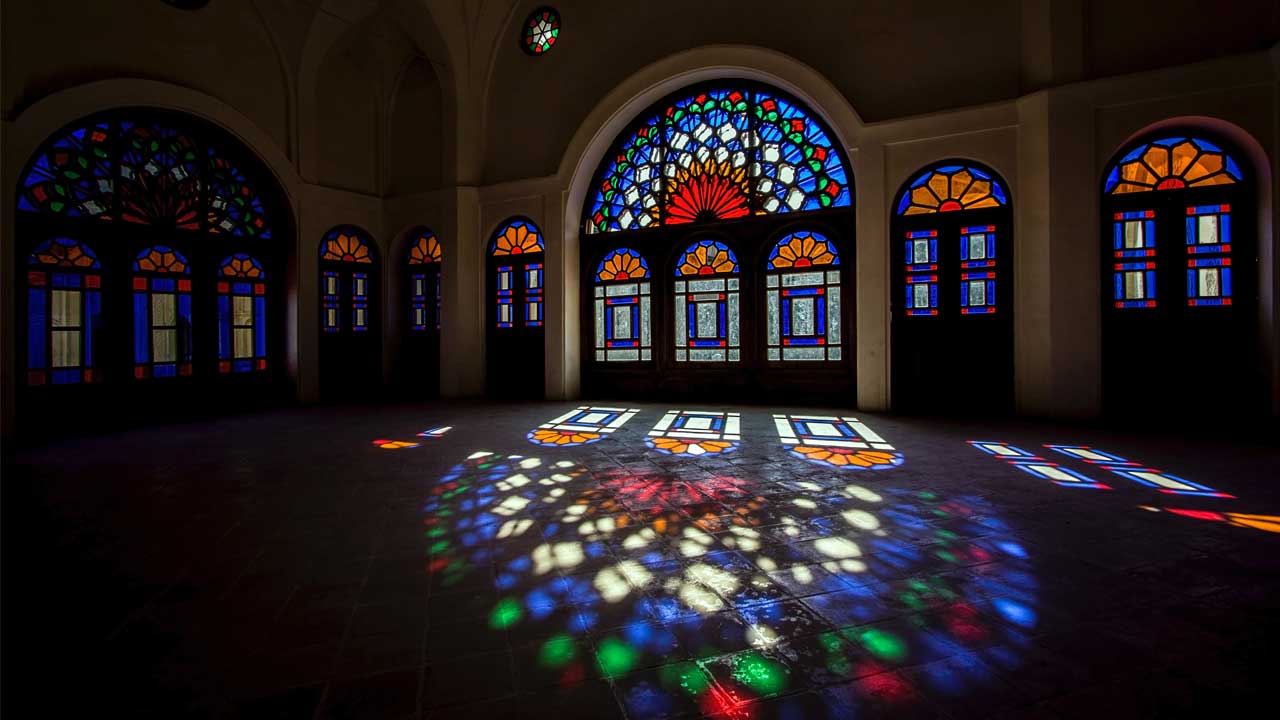 Abbasian House, One of the Most Stunning Historical Houses of Kashan

Historical houses have unblemished exterior with simple decorations. On the contrary, the interior of the building is so impressive. In general, Persian architecture is interior-oriented and Abbasian House is not excepted to this rule.

The special structure of Abbasian House interests all the travelers. This house features symmetrical architecture, interconnected rooms and elaborate stucco. That is why it is known as a brilliant architectural example for historical houses of Kashan. 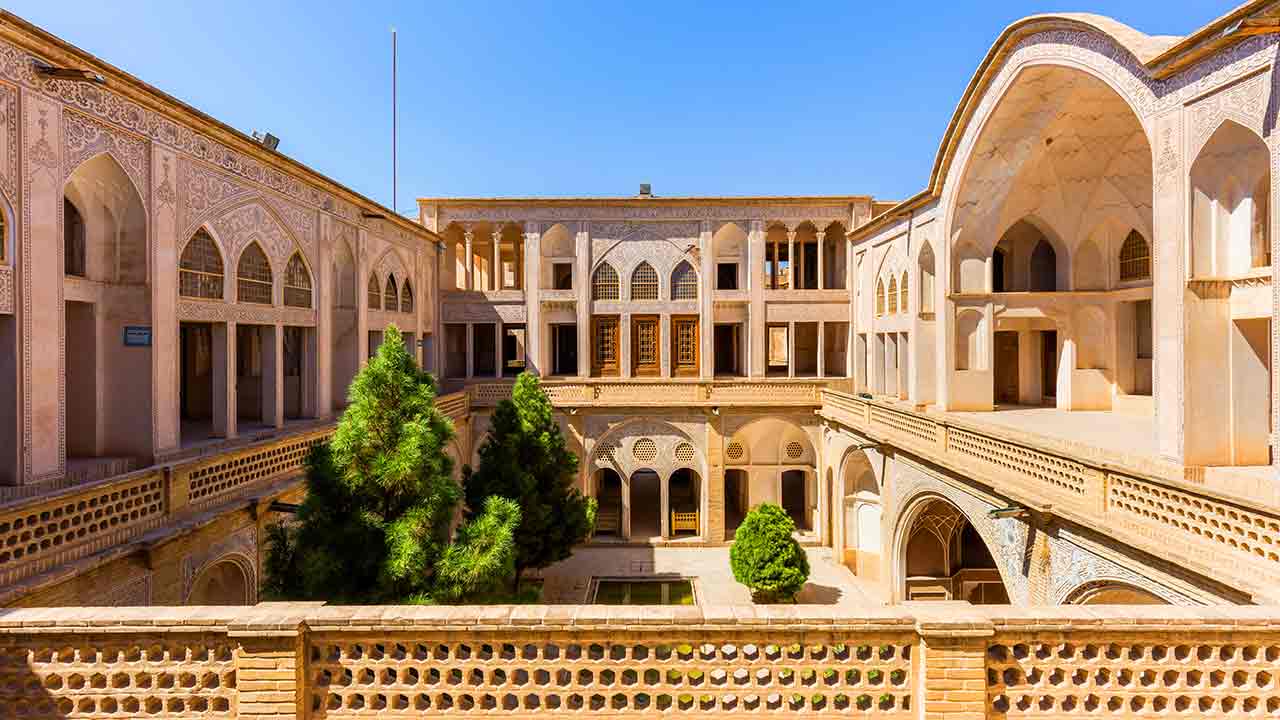 The in Line with Climate

Abbasian House was constructed in the 18th century by one of the merchants of Kashan. This house, which is 5000 m2 wide, is one of the most visited historical houses of Kashan. It has a garden pit and 5 courtyards each of which has a unique architecture.

Garden pit is an Iranian architectural element based on desert regions. According to this architectural style, the building is constructed below the floor. As a result, it has an easier access to qanat, and the courtyard is covered by the shadow of the building. In addition, the lower floors are cooler than the other sections. So, we can say that the architecture of this house is in line with the hot and desert climate of Kashan.

It is mentionable that Abbasian House has summer and winter parts. Each of the sections was used in a special season based on the weather conditions.

How Religious Beliefs Affected the Architecture of Abbasian House

Abbasian House is divided into Andaruni and Biruni, just like the other historical houses of Kashan. It indicates the role of religious beliefs in the architecture of this structure. For example, interconnected rooms have been designed to separate the residence of men and women. The roof of this house is also surrounded with a wall to prevent the neighbors from viewing inside. Two different knockers have also been designed for the houses, which make different sounds. In this way, the inhabitants of the house can tell the gender of the person at the door.

Boroujerdi House, the Most Famous Historical House of Kashan

Boroujerdi House, dating back to the 19th century, is one of the most popular historical houses of Kashan. It took 18 years to be constructed. More than 150 plastering artists, painters, mirror artists and architects were involved in this project.

The magnificence of Boroujerdi House has brought about its global reputation. In 2014, then president of UNESCO traveled to Kashan and introduced this site as the most beautiful historical house of Asia. In 2015, Boroujerdi House was selected as the most popular Iranian site. 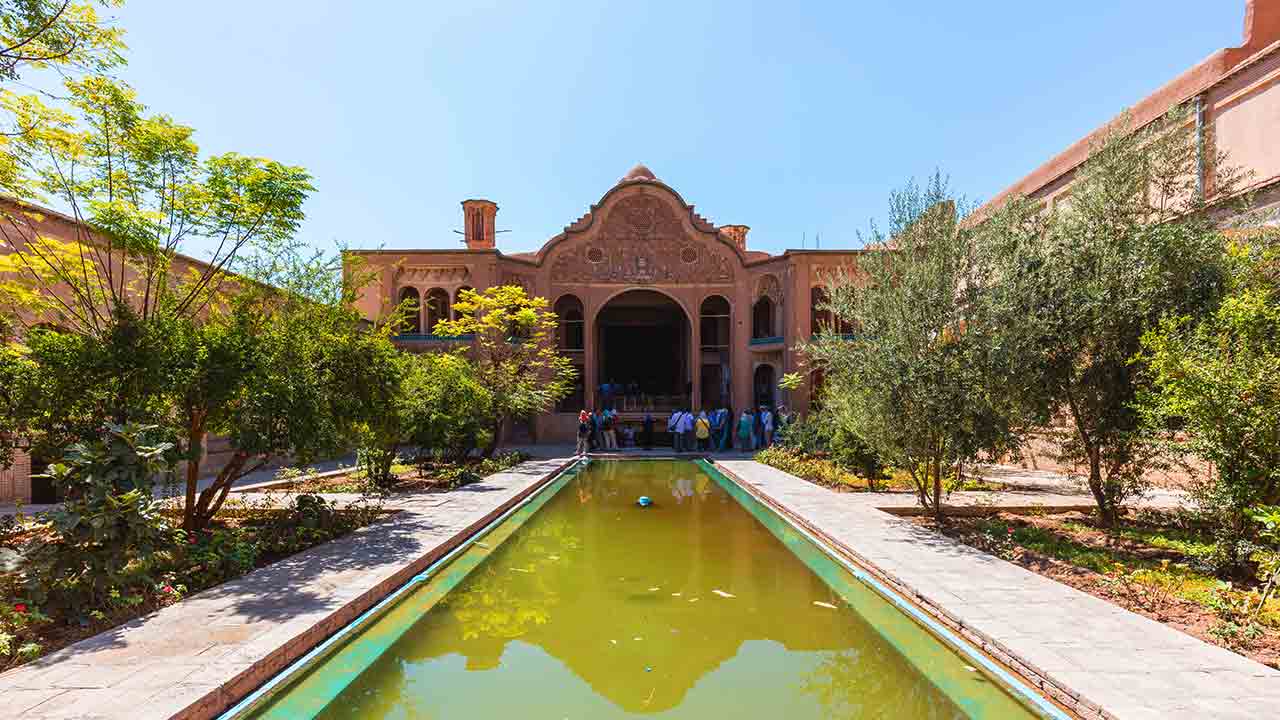 The Architecture of Boroujerdi House

The interior paintings of this house were drawn by Kamal-ol-molk, the known Iranian painter, with oils or watercolor. These paintings are beautifully worked in Panjdari, also known as Shahneshin. Besides aesthetic elements, these paintings include cultural and social principles. Some of them are also inspired by Iranian myths.

Andaruni and Biruni of Borujerdi House are connected with each other through an aisle. A section of house, known as Mahtabi, lies on the northern face of the courtyard. It has no ceilings and is constructed upper than the courtyard level. Mahtabi is closed from three sides and overlooks the courtyard from one side.

Like many of the historical houses of Kashan, this mansion has two tall windcatchers. The channels of the windcatchers extend from top of the ceiling to the underground. This system provides ventilation and cool basement; in addition, the foundations are sealed against humidity. The channels are dug in underground and connected the basement with lattice vents.

Tabatabaei House, the Bride of Historical Houses of Kashan

Tabatabaei House is of the most beautiful historical houses of Kashan, constructed by the order of a well-known carpet merchant. It was designed by Ali Maryami Kashani, a prominent Iranian architecture.

The owner of Tabatabaei House was an international carpet merchant. So, all the stucco patterns of this mansion have been inspired by Persian rug patterns. In addition to daily life, important business meetings were conducted in Tabatabei House. 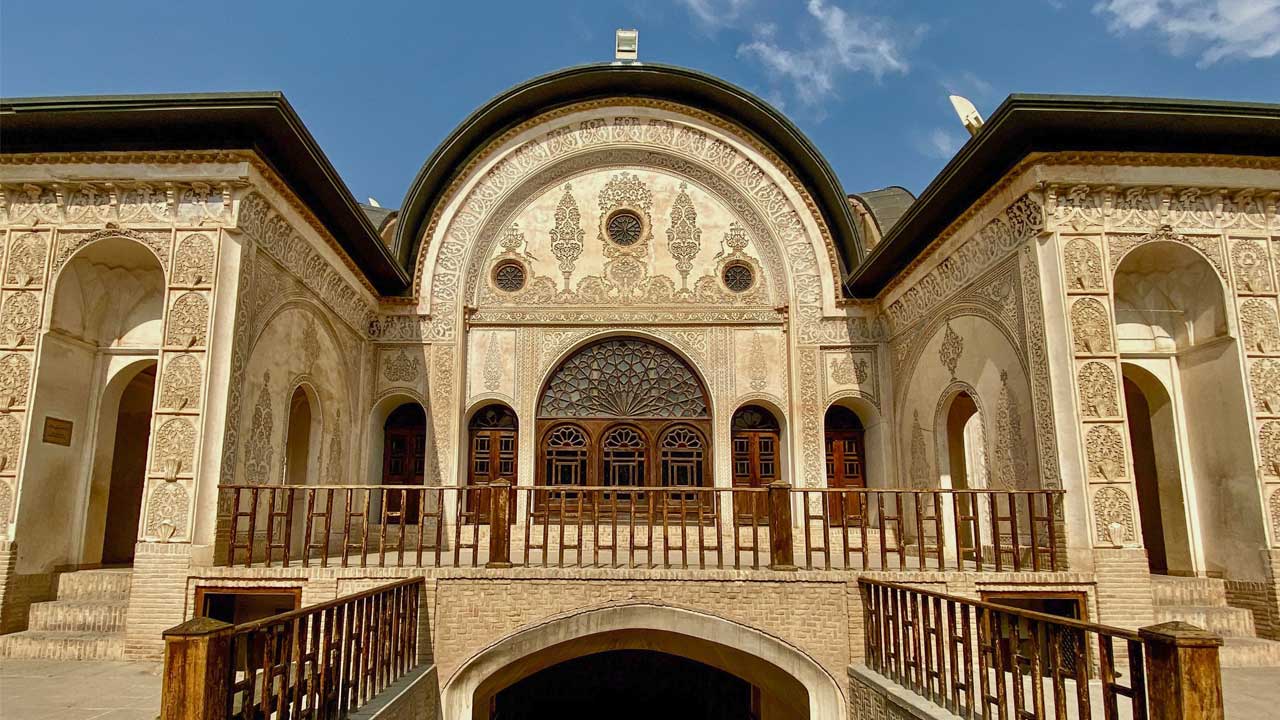 The Architecture of Tabatabaei House

Tabatabsei House fits hot and dry climate, like the other historical houses of Kashan. Its courtyard includes a large pond and six small gardens in which you can find pomegranate and fig trees. It has two types of room, one type of the rooms which gets much light were used in the winter and the other type that takes much shadow were used in the summer. Winter rooms, featuring short ceilings and fireplace, are also known as mirror rooms. The windcatchers having devised in the architecture of this mansion makes cool air move in all the home space. However, this air flow is stopped in the winter due to the cold weather.

The main hall of Tabatabaei house has been decorated so beautifully. The decorations include skylights, colorful lattice windows, mirrors and stuccos. It also has a servant section, including a courtyard, rooms, matbakh (literally means kitchen), winter and summer stables.

Visiting the Historical Houses of Kashan, a Journey to the World of Persian Art and Architecture

On your trip to Iran make sure to visit the historical houses of Kashan. These historical sites demonstrate the grandeur of Persian architecture. Visiting these sites, you get familiar with the lifestyle desert people.

To visit the historical houses of Kashan, join us in 1001 Nights Tours. The tours we have considered for this city, are so organized and run with professional guides. To know more about the tour details, click here. In case you are interested to obtain more information about the other attractions of Kashan, click here.
We always welcome your suggestions and viewpoints in respect with running special and thematic tours. So, don’t hesitate to contact us via email.