Shushtar Hydraulic System has a special place historically. To visit these structures; travel to the city of Shushtar, which is surrounded by Karun River and welcomes many tourists annually. For sure, this water flow resulted in the formtion of this fabulos complex.

Shushtar Hydraulic System is a wide complex of bridges, dams, mills, waterfalls, channels, and tunnels. All this sections are connected to each other to direct the water. In the other words, it was mainly established to benefit the most of water.

This hydraulic system reveals a masterpiece of ancient engineering that is unique in Iran and the world. It is located on the rout of Gargar River as a man-made canal. This river is probably dated to the reign of Ardeshir Babakan. 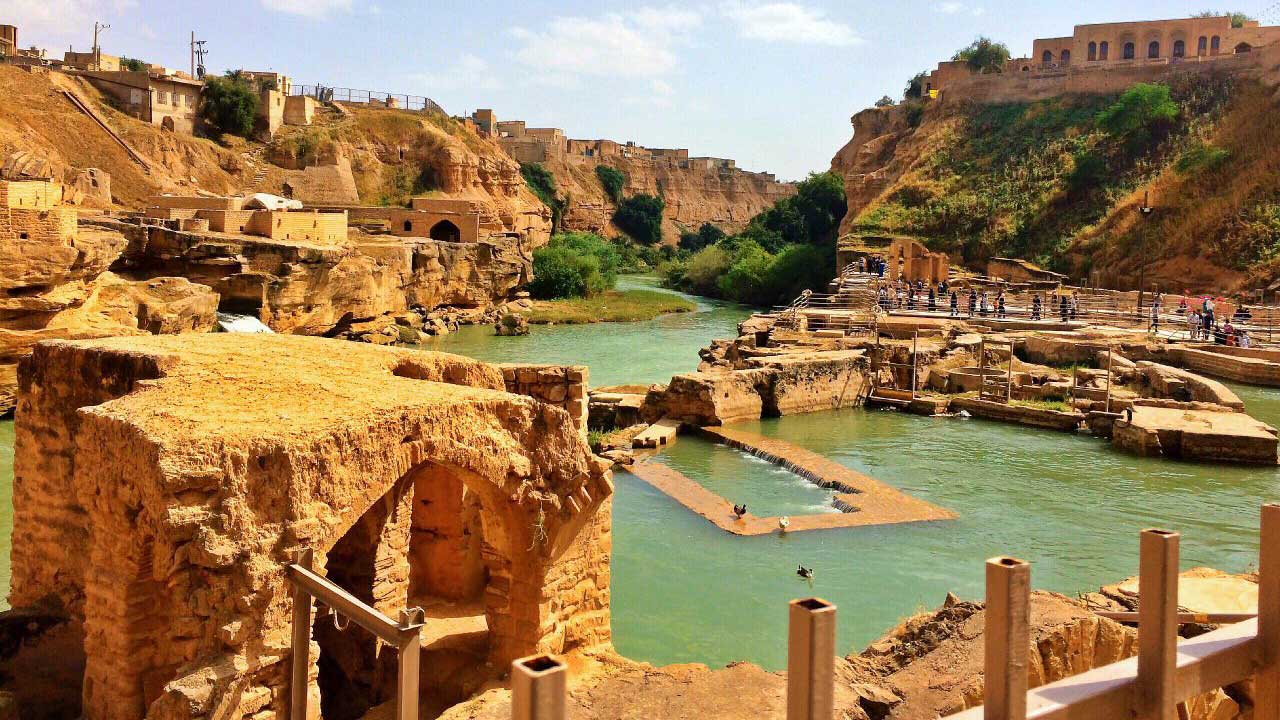 You can find the factors based on which this system was registered in UNESCO below:
1- It is a masterpiece demonstrating genius and creativity.
2- It reflects the exchange of human’s values is a special period of time.
3- It is a prominent example of relations between human and environment.

The History of Shushtar Hydraulic System

Shushtar Hydraulic System was constructed from the Sassanid to Achaemenid era. Some relics, having been discovered in Shushtar, proves that this city dates back to Paleolithic era. Because Karun River, had made appropriate conditions for prehistoric humans.

Being close to Tchogha Zanbil Ziggurat, this city had high importance in the Elmid era. The first structure of this hydraulic system was constructed in the reign of Darius I. Later, it was renovated in the Sassanid era, in the reign of Artaxerxes I. Since then, hydraulic systems expanded; as a result, bridges, canals and water mills were constructed in this system. As a consequence of equipping irrigation facilities, farming was prospered in this city and became the main career of locals. 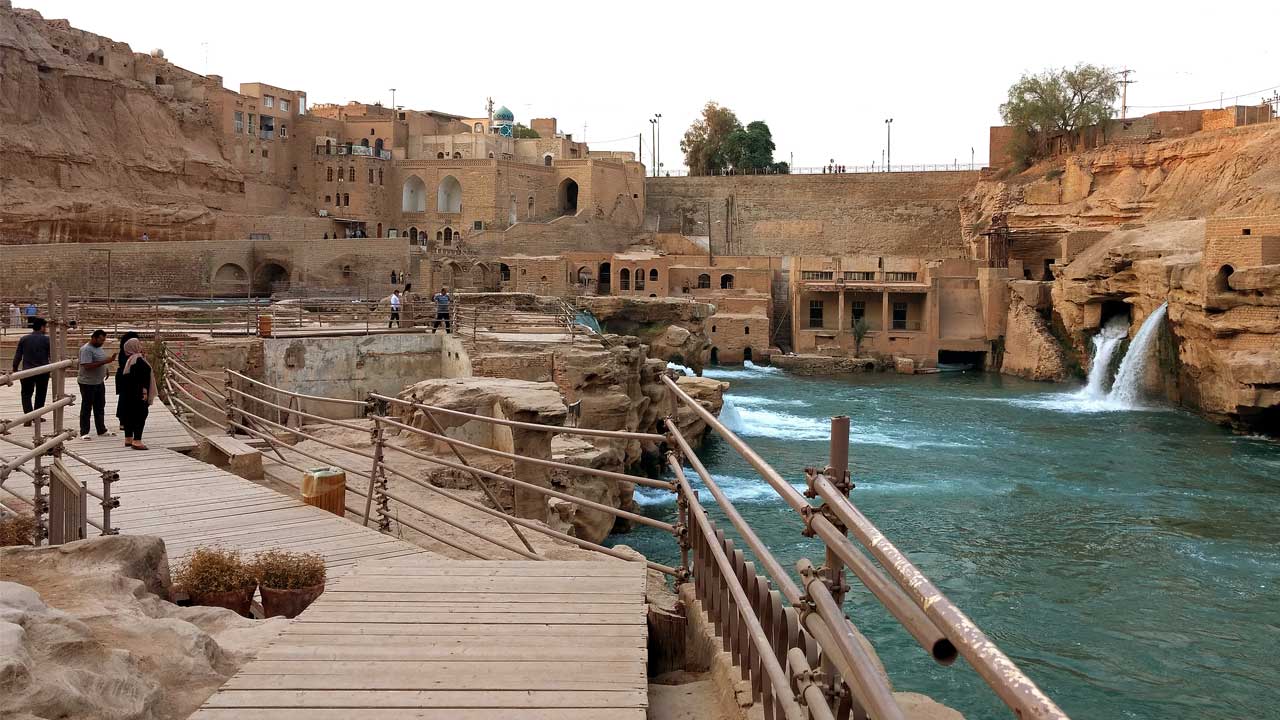 The Architecture of Shushtar Hydraulic System at a Glance

Shushtar Hydraulic System is a gigantic structure having been constructed with simple tools, but advanced computation knowledge. In this regard, it is considered as one of the wonders of history. The materials used in its structure are stone, mortar and ash. For sealing purpose, some holes have been made in this structure. That is why it is still standing after thousands of years.

This system is used to channel Karun River to different points of the city. Before this system was constructed, spring raining resulted in floods in the plains. As a result, some regions didn’t have access to water. So, the establishment of this system improved water management in the city of Shushtar.

The operation of this hydraulic system has been planned in detail. In addition, the water leading path has been designed in a way that doesn’t hurt over time. First, water is collected behind a dam and passes through the wall via ditches. Passing through water mills, water enters the tunnels, the collected water is pushed out like a fountain and used for farming and daily usages. 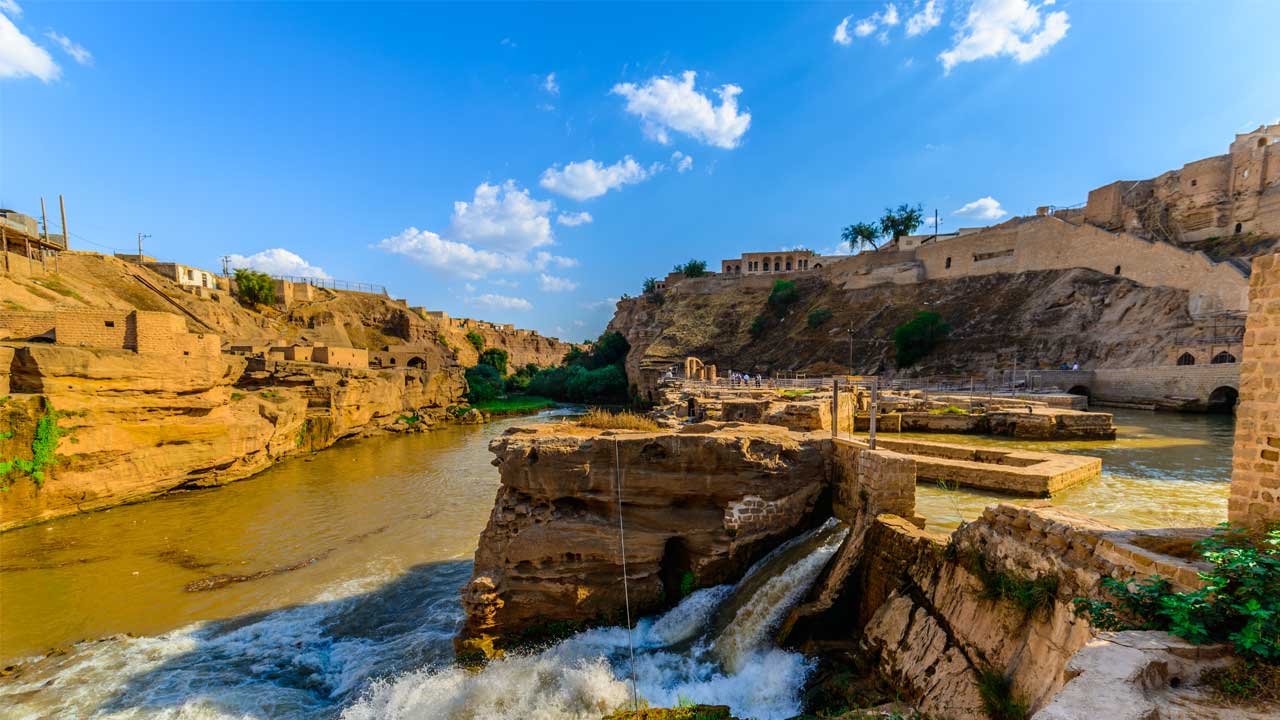 The Constituents of Shushtar Hydraulic System

Shadorvan Bridge-Dam, dating back to the Sassanid era, is the oldest bridge of the world. It used to have 44 sluices; today, 37 of which has remained. 50% of this bridge has been renovated currently. According to historical documents, the emperor of Rome, Valerian, was forced to work in the process of constructing this bridge after being captured by Iranian army.

Mizan Dam regulates Karun River by channeling its water to Gargar and Shatit Rivers. In case Gargar River is discharged more than one third, Mizan Dam flows some of the water to Shatit River through its sluices

Irrigating 40,000 hectors of fields, Mizan Dam played an important role in the prosperity of Shushtar. At a period of time, it was broken and many problems came into the lives of people.

3- The Complex of Waterfalls and Watermills

This complex is of the most important constituents of Shushtar Hydraulic System. It entails damns, tunnels, sub-channels and water mills. That is why many people know it as an industrial complex.

The water mills are used not only to direct the water of river but also to move the wheels. As a result, farmers could produce the floor they needed. It is mentionable that there used to be 40 water mills in this area, 20 of which have survived.

As well as economic and consummating usages, this complex has brought beauty to the city. The water coming out of the mills in the form of effluent flows is like a beautiful waterfall. That makes a memorable picture for the tourists travelling to this historic place. 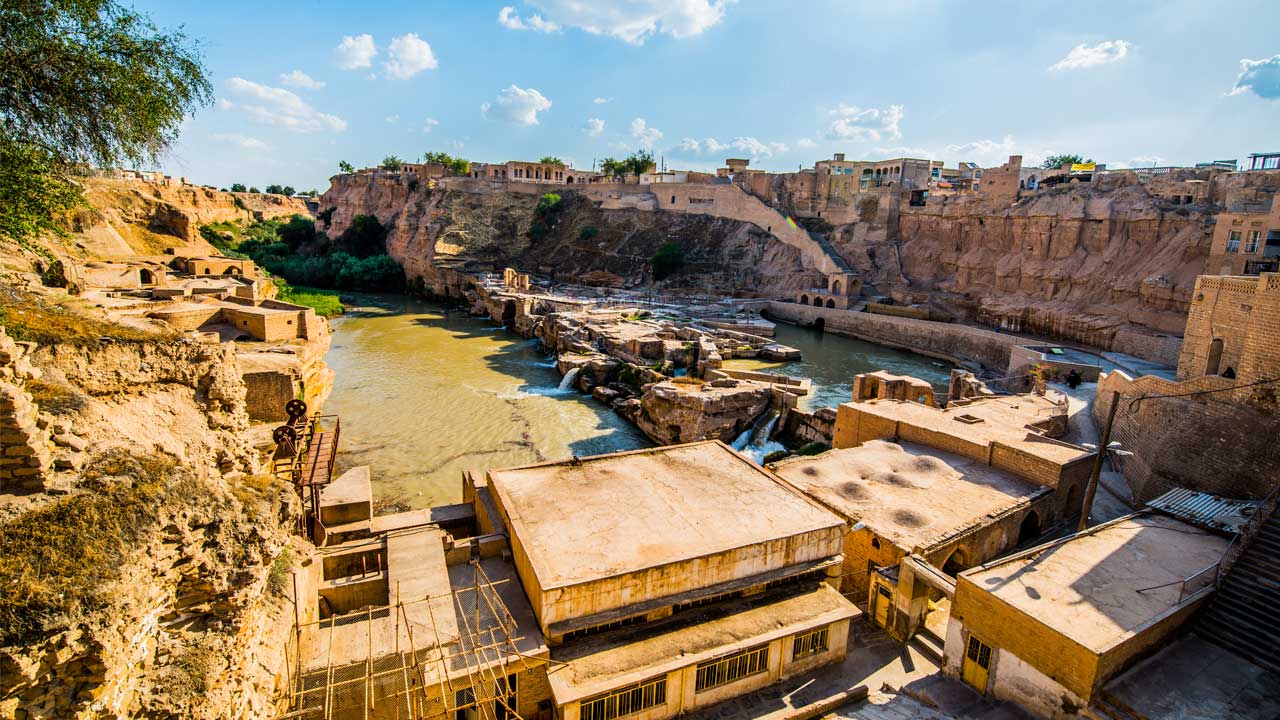 Gargar is a man-made river which is separated from Karun River by Mizan Dam. It is 40 Km long and dates back to the Achaemenid era.

There were three main reasons why this river was formed. For example, reduction of the level of Karun River, irrigating upstream lands, and the security of the city. In addition, green palm trees have grown around the river, known as Khan Garden.

Gargar Bridge Dam is situated on the northern face of Shushtar Hydraulic System. This bridge dam has three tunnels through which water is transferred to the downstream. The water is pushed out in the form of beautiful waterfalls.

Kolah-Farangi Tower, a constituent of Shushtar Hydraulic System, is located on top of a hill at the end of Mizan Dam. This octangle structure is about seven meters high. According to documents, this monument was the watchtower of Shapur Sassanid. On top of this tower, the Sassanid king was able to monitor the performance of labors who were working in Mizan Dam.

Salasel Castle used to be the defensive fortification of the city. This huge castle entails numerous yards, bedchambers, timpani homes and harems. This castle was the living place of Khuzastan governor. In addition, Dariun Canal was monitored from this castle.

Ayar Tower Dam is another Sassanid structure, having been constructed on Gargar River. This dam, which is like an arched wall, is located lower than the watermill and waterfalls area. The main reason for constructing this structure was to rise water level and direct it towards gardens. In the lower part of this structure, there are some stairs to measure the water level.

Saebin Place of Worship is located on the eastern face of the Ayar Tower Dam. This worship place includes ponds and rooms used for rites. Since Saeby religion is based on baptism, many of the followers of this religion lived around Gargar River.

Khoda-Afrain Bridge Dam, located on the riverbed, is a natural dam made from Sandstone. This phenomenon uprises the water level of Gargar River and water pressure.

Dariun Canal was constructed in the reign of Darius I to divide the water of Shushtar. This canal trabsfers water from the north of the city to the south. It also channels the water flowing in the western regions of Shushtar to the city of Shushtar and farming lands.The mouth of this canal is located under Salasel Castle. So, the water of the canal is controlled by water bailiffs on top of the castle.

Khak Dam played an important role in controlling the flood. It was also used as a storage to store water. In addition, this dam transfers water from Dariun Canal.

Sharabdar Dam is situated in the south of Shushtar on a part of Dariun Canal. This dam, stretching from east to west, is on the north of Shushtar’ rampart.

Lashkar Bridge Dam is located beside the gate of the city of Lashkar Shahr. So, you can see the remnants of this gate next to this bridge dam. There is an assumption that Anahita Temple on whose remains Imamzadeh Abdollah Shrine has been erected, lied next to this bridge. Because a marble fire holder was discovered in this place in the past 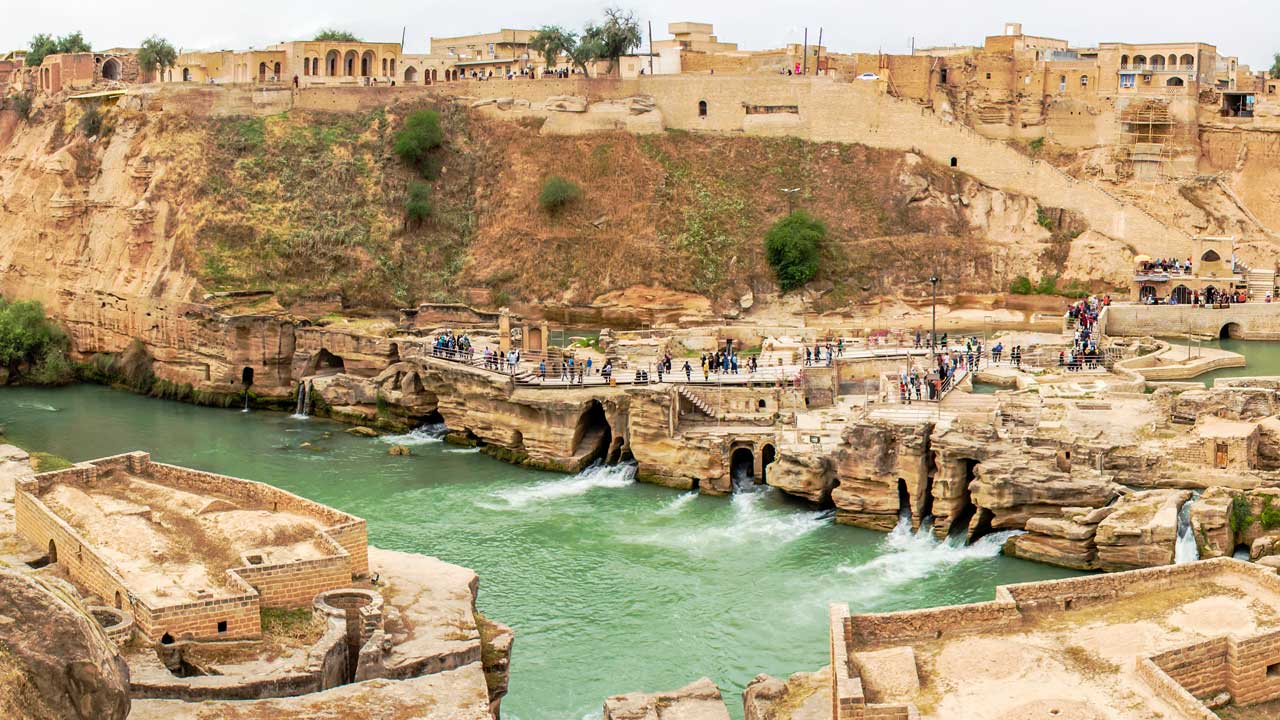 Shushtar Hydraulic System in the Eyes of Tourists

Ibn Battuta is one of the popular tourists who wrote about the city of Shushtar. He well describes the magnificence of Shushtar bridges. He also describes Shushtar as a big, beautiful and prosperous city with great gardens. According to his narrations this city is home to deep and roaring rivers around which there are splendid gardens.

Shushtar Hydraulic System, Visiting the Alive Museum of the World

On your trip to Iran, you can visit a masterpiece of human genius in the ancient era up close. Every moment of strolling in the city of Shushtar makes an unforgettable memory for you. This city and its hydraulic system are one of the numerous UNESCO-listed sites of Iran.

1001 Nights Tours has designed some tours based on which you can visit important antiquities of Iran. To view the tours that include this city click here. You can also click here to know more about the UNESCO-listed sites of Iran.
We always welcome your suggestions; don’t hesitate to be in touch with our team via email.